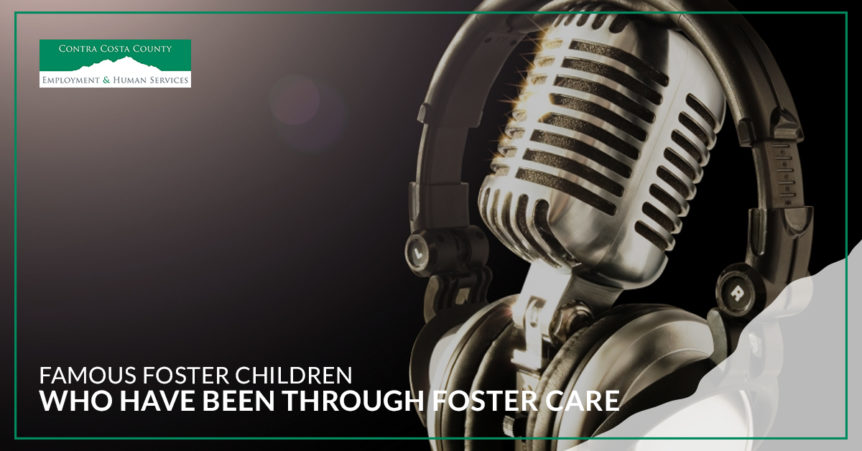 Foster care is a rather quiet part of the system set up for the public good. Because we’re dealing with kids and the delicate situations that they have been through, we tend to keep a pretty low profile. Still, that doesn’t mean that we don’t have thousands of success stories of children who have been through the foster care system. These stories often go unnoticed, as children are either successfully returned to their parents or are adopted (or age out of) the foster care system.

Sometimes these children do become well-known members of society, and are a good example of how the foster care system can have a major impact on kids lives. Let’s take a look.;

Eddie Murphy is one of the highest-grossing Hollywood stars in the world. After all of the Beverly Hills Cop, Klumps, and Shrek movies, movies including Murphy have brought in more than 3 billion dollars.

When he was only eight years old, Eddie Murphy’s father, a police officer, was murdered. Just a year later Eddie’s mother because seriously ill and was unable to take care of him and his brother, so they were put in foster care while she recovered.

Whether you agree with his sideline situation or not, you can’t deny that Colin Kaepernick is a great quarterback. Since starting his professional quarterback career in 2012, Kaepernick has broken many records in the NFL.

Kaepernick, the youngest of three siblings, was put into foster care and then adopted. Another success of the foster care system!

Steve Jobs was one of the most successful businessmen to ever live. He created Apple Computers, was fired from it, saw it wane during his absence in the 1990s, started Pixar Animation in the meantime, and then was rehired to Apple and turned it around into one of the largest companies in the world. The iPod, iPhone, and iPad are all his brainchildren.

Jobs’ mother gave him up when he was born in San Francisco in 1954. He spent his foster experience with his soon-to-be parents until they could adopt him.

Imagine a life without John Lennon. If he and the Beatles hadn’t formed, music wouldn’t have made many of the leaps it did during the 1960s. After all, the Beatles are one of the best examples in history of a group that was greater than the sum of their parts. He made Paul McCartney better, than they together made George and Ringo better.

John Lennon represents one of the most common forms of foster care, that of a relative taking care of a child for a parent who cannot. Lennon was raised by his Aunt Mimi for most of his childhood. While Mimi was never a fan of his early musical aspirations, she did a wonderful thing taking John in when neither parent was around to do so.

Few people have the notoriety of Norma Jeane Mortenson, aka Marilyn Monroe. A model and actor, Monroe would become one of the most famous people in the world thanks to her career and the people she hung out with.

Monroe’s mother had a history of mental illness, and Marilyn spent many years away from her mother and in the care of foster parents.

Marilyn Monroe wasn’t the only 1950s icon to receive foster care. James Dean, though he only starred in three movies, is today one of the most recognizable actors in the world.

Dean’s mother died when he was only nine years old, leaving his father in the lurch. After they moved to Indiana, James Dean was mostly fostered by his aunt.

Willie Hugh Nelson is one of the most famous country western singers of all time, best known for his songs On the Road Again and Always On My Mind. For well more than 50 years he’s been producing songs, and at 84 he hasn’t slowed down much. He still tours around the country regularly.

Nelson was born during the Great Depression. After being abandoned by both of his parents, Nelson was eventually fostered by his grandparents. They were the ones who introduced him to music.

You know Tracy Morrow, aka Ice T, from someplace. After all, he’s a rapper, heavy metal musician, songwriter, actor, author, and record producer. For 17 years he has played a police officer on Law & Order: SVU.

While record labels have attributed Ice T’s parents’ deaths to a car accident in order to make it seem more tragic, Ice T himself acknowledges that both parents died of heart attacks during his childhood. After that, he was fostered by two of his aunts in Los Angeles. This environment heavily influences his coming careers.

Louis Armstrong is one of the greatest trumpet players of all time. For five decades his amazing playing made him a top record seller as jazz and dixieland became popular.

Armstrong’s parents, unable to care for him, sent him to live with various relatives in New Orleans during the early 1900s.

Cher, born Cherilyn Sarkisian, is one of the most successful singer/songwriters of all time. It all started when she and husband Sonny Bono released the hit single “I Got You Babe” in 1965, and she’s been making music ever since. She’s also been praised for her acting in movies such as The Witches of Eastwick and Moonstruck (winning an Oscar for Best Actress for the latter).

Due to an illness, Cher’s mother was unable to take care of her for a time, which meant that she was fostered by her grandparents.

Alonzo Mourning, or Zo as he is sometimes called, played most of his career with the Miami Heat basketball team. He was so successful, in fact, that he was the first player from that team to ever have his number retired. His specialty was defense, and was twice named NBA Defensive Player of the Year.

After his parents’ divorce, home life wasn’t easy on Alonzo. Already six feet tall at the age of 12, the situation was made better when he went to live with a family friend who had extensive experience fostering children.

Those are far from the only children who have grown up to be incredibly successful, but each of them is certainly an inspiration. While the child you foster probably won’t be famous, it’s almost certain that they will become a better person because of you. Contact Contra Costa County foster care services today if you think you’d like to be a foster parent.