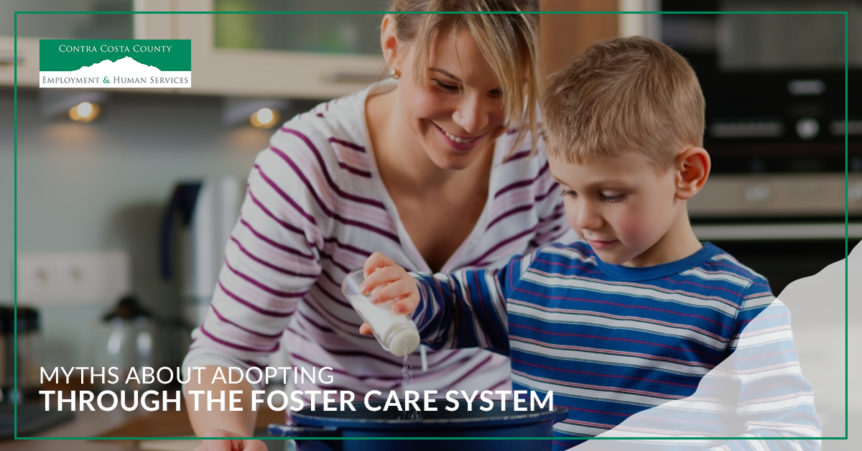 In our most recent blog, we detailed some of the common myths that plague the foster care system. Many of those myths could prevent people from considering foster care in the first place, which is simply a sad situation. We certainly don’t want falsehoods and urban legends come between a big-hearted person and a child who needs them.

Likewise, there are some myths that specifically deal with adoption and the foster care system. Adoption isn’t always an option; the point of foster care is to reunite a child with their biological parent as often as possible, after all.  But we thought we’d write about some of the more common myths surrounding foster care adoption in order to knock down a few more barriers that might prevent someone from considering it.

As we’ve noted before, adoption doesn’t have to be in your future when you’re a foster parent. Some foster carers are more than happy to help kids for a short amount of time before they head back to their natural parents.

If the chance does come along and you are interested in adopting, you probably won’t have to worry about the financial costs. While adopting does cost some money, it’s seldom an amount that counts as a burden, and some of that can be offset by tax deductions or state grants. And if you’re already fostering the child, they’re already living with you, so you don’t have to wait!

We don’t want to discourage adopting from overseas, which is also a great option. But domestic adoption can be five to ten times cheaper. It also takes a shorter amount of time, often taking just six months. Because of these factors, children are adopted through the foster care system at a five-to-one ratio over overseas adoptions.

Myth: Adopted Children Can Be Claimed By Biological Parents

Again, remember that foster care doesn’t always lead to adoption. But if you choose to adopt and the child is able to be adopted, there’s a myth that the biological parents can come back and “reclaim” the child. That’s not true, as adoption is legal parenthood and you will become the decision-maker for the child until they are 18. Once you’ve adopted the child, you will get to decide whether or not they have any connection with their blood relatives.

Myth: The Kids Don’t Want To Be Adopted

This one has a bit of truth to it. Some children who are in foster care don’t want to be adopted, for the simple reason that they’d rather be with their biological parent. And that makes a lot of sense; once the parent proves that they can take care of the child, the best place is often with them.

Other children, however, will be in the foster care system with no chance of ever being reunited with their parent. The parent might have been too abusive, sentenced to prison for life, or even be dead. Such children with no hope of living with their blood relatives simply want stability, and if you form a bond with them they will be more than happy to be adopted.

Myth: An Adoptive Parent Has To Be Young

There aren’t any upper-end age restrictions on adopting a child. If you are already in the foster care system and taking care of children, you won’t be excluded from consideration because of your age if you’re interested in adopting them.

Myth: I Have To Be A Stay-At-Home Parent To Adopt

This is a myth that also shows up for foster parenting, but it also rears its head when it comes to adopting the child. Parents who have biological children hold down full-time jobs, and so do parents of adopted children. When you adopt, you are able to make the same decisions for that child as you do for your own children, so if your adopted child heads to daycare with your biological children, that’s just fine. Again, after adoption, they’re your child!

If you’re interested in becoming a foster parent with the option of adopting, we’d love to talk with you. Foster care is a wonderful experience, but even it can’t compare to the feeling you’ll get when you adopt your child and remove them from the system entirely. Is it worth it? More than you’ll ever know.